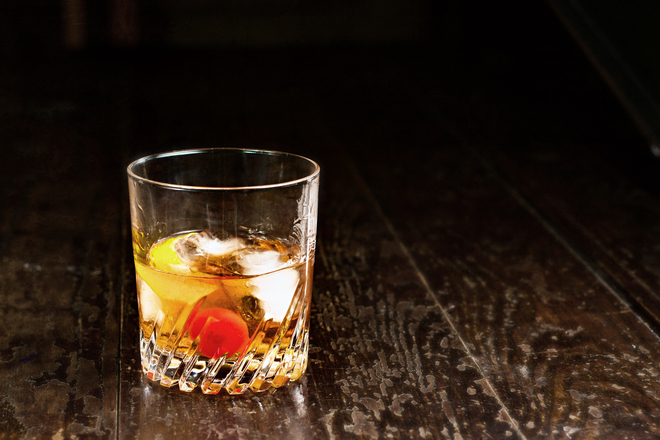 Anyone can tell you how to make cocktails, but why? Well, you can:

Although cocktails have a reputation as a rich man’s drink, you can make many classic cocktails for less than a dollar. So what’s the catch? Unlike flipping the tab on a can of beer, mixing a cocktail takes preparation, knowledge, and just a little work. The world of affordable cocktails goes far beyond sorority girls pouring grape Kool-Aid into their Smirnoff, and it’s worth a try if you’re interested in expanding your drinking horizons without trashing your wallet.

What’s a fancy drink without some historical trivia to drunkenly shout at your dinner guests?

In 1825 America, a “cock tail” was a mixed drink made with liquor (generally whiskey or gin), sugar, water, and bitters. If you wanted something else, you’d ask for a sour, a sling, a fruit cup, or whatever. In the late 1800s, as the term “cocktail” came to refer to any mixed drink, people began to call the original version the “Old Fashioned cocktail.” Over the past century, the definition has crystallized to specify whiskey as the liquor and Angostura as the bitters.

For our point of comparison, let’s choose Budweiser, which costs $19 per 30-rack, or 63¢ per can. How does an Old Fashioned compare?

A total of 52-62¢ per drink. For less than the price of a Bud, you can make a cocktail that is superior in every respect. Including, by the way, alcohol content. You won’t get as good a deal if you buy in smaller quantities, but you can’t really buy a single Bud for 63¢ either.

For the record, all of these prices come from Yankee Spirits, just outside of Providence. Your mileage may vary.

Things to buy at a liquor store:

Things not to buy at a liquor store:

Since they know you want a one-stop shop for all your drink mixing needs, they’ll gouge you on limes, coke, and especially simple syrup.

This drink belongs in an Old Fashioned glass, also called a lowball glass. This is a low-volume drink, and if the glass is too tall or too thin, you’ll tilt it up to drink and then all the ice will hit you in the nose, which will make you real mad. You’re probably thinking, “well I’m not made out of exotic drinkware over here,” in which case you can use the plastic cups they give you on airplanes; they’re just the right size and they look great. If you’re drinking alone, a coffee cup is good too.

The origins of whiskey

The word “whiskey” originally comes from the Gaelic “uisge,” meaning “water.” The Scottish and Irish instead made barley beer by mashing up grain and allowing it to ferment. The introduction of the distillation process allowed them to turn this mash into whiskey, which was for some reason prized for its medicinal virtues. After the unification of England and Scotland, the English placed increasingly heavy excise taxes on whiskey, driving many distilleries underground. These distilleries would operate by moonlight to conceal smoke from the authorities, leading to the term “moonshine.”

When the Scottish and Irish came to America, you can bet they didn’t give up whiskey-making. They just switched from barley to corn, which grew better in America. Before railroads, there was no good way for farmers to transport their corn to distant markets. Instead, they distilled it into whiskey, which fit into a much smaller space and didn’t go bad. It was even used as a substitute for money in some places, so when Alexander Hamilton passed an excise tax on whiskey to help pay off the national debt, the farmers of western Pennsylvania took up their muskets and started tarring and feathering tax collectors. Obviously, you can’t do that, so President Washington raised a militia to suppress the rebellion. In the end, the rebellion was resolved with only about three intentional deaths. In a heartwarming affirmation of the power of the democratic system, Thomas Jefferson took over from John Adams and his Federalist cronies in the election of 1800 and repealed the excise tax.

Meanwhile, in Kentucky, nobody was even trying to enforce the whiskey excise tax, and a few farmers living around Bourbon County decided that it was high time to invent bourbon. Around 1840, a Scot with a medical degree, Dr. James C. Crow, developed the sour mash process, in which mash from previous batches of whiskey is included in the next batch to stabilize the acidity and flavor. Nowadays, bourbon is made from about 70% corn, and it’s aged in charred-oak barrels. Compared to rye whiskeys, corn whiskeys are usually sweeter and a little less harsh. For an Old Fashioned, I like bourbon, but any American whiskey will do.

How to buy it

If you read any recipe book for anything ever, the author will probably mention that using only the best ingredients is absolutely crucial. Of course, the more you spend on your whiskey, the better your drink will taste, but I’m not here to tell you that; I’m here to tell you what you can get away with and still have a great drink. In general, you probably want to stay away from heavily marketed, brand name liquors. They often cost more than they’re worth.

Some cocktail manuals recommend that you place loose sugar or a sugar cube onto the bottom of the glass, wet it, and then muddle it. Although I like silly old traditions as much as the next guy, this approach just won’t work with ordinary household sugar. Even if you mix it for a few minutes, the sugar will quickly sink back to the bottom of the glass and you’ll get angry. This works only with superfine sugar, which is impossible to find.

Simple syrup to the rescue! This incredibly boring mixture of sugar and water will revolutionize your cocktail making experience. Instead of retreating to the bottom of your cup, the syrup will mix right in. There are two ways to get simple syrup: you can buy it for way too much money, or you can make it yourself.

How to make simple syrup

Heat up some water to near its boiling point. Pour in your sugar gradually, stirring as you go. You probably want about a 2:1 ratio of sugar to water for a thicker syrup. Don’t forget to allow the syrup some time to cool before you put it into your drink.

A “bit” of history

A bitters is an alcoholic beverage strongly flavored with herbal essences. In the days of early America, each tavern would make its own distinctive bitters. In 1824, Dr. JGB Siegert developed a new bitters as a cure for stomach maladies using local ingredients from near the Venezuelan town of Angostura. Siegert’s company was one of the only bitters companies to survive prohibition, and since then Angostura bitters have become standard in the Old Fashioned.

Liquor stores almost always have bitters, and supermarkets sometimes carry them as well despite the alcohol content. A single bottle of bitters might cost from $6-$9, and it’ll be good for a couple hundred drinks, so better get started now! Angostura bitters are often used in the Old Fashioned.

A cocktail isn’t a cocktail without some silly fruits, so grab a jar of Maraschino cherries and an orange. If you want to skip out on the orange, you may, but an orange slice on the rim of your glass can be the difference between trashy and classy. If you’re really bored or you own a lemon farm or something, you can use a knife or a peeler to make some lemon twists to throw on top. Technically, they should be there, but it doesn’t change the taste of the drink.

If you’re only making a few drinks, your ice cube tray will be fine. If you’re having a party, or alcoholism, you can grab a bag of ice from a big box store or a liquor store for a little more than a dollar. Before opening your bag of ice, hit it for a while with something heavy and metal (I use the back of a meat cleaver) to break up the larger chunks. Throwing the bag onto the floor can also work well; you’ll end up with bigger cubes that way. Either way, it’ll be much harder to break up the chunks once the bag is opened.

The International Bar Association provides “official” recipes for many well-known cocktails, but these are by no means definitive. As far as that goes, I say there’s no single right way to make an Old Fashioned: sugar vs. syrup, bourbon vs. rye, muddled-fruit vs. whole-fruit vs. no-fruit, and probably many more controversies rage to this day. Technically speaking, the only permissible way to resolve these disputes is via a musket duel. People have been tweaking these recipes for hundreds of years, so why stop now?

Instead of trying to cover all the bases, I’ll provide the recipe that I think is simplest and most practical:

Don’t forget to stir it up. If it’s too rough, add some simple syrup. It’s your drink, after all.

What can you do with all that extra bourbon?

My mom! For the agricultural history.