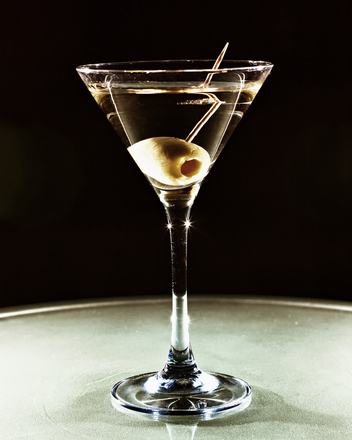 Many establishments use the term “martini” to refer to any drink served in a martini glass (appletini, flirtini, velociraptini, and so on). These are not martinis, in the same way that tomatoes are technically fruits. So, maybe not the best conversation starter? A martini is gin, dry vermouth and olives. Or a lemon peel, actually, but let’s just stick with the olives for now.

In the mid 1600s, a Dutch physician named Franciscus Sylvius developed a spirit called jenever by distilling malt wine and then adding juniper berries to mask the incredibly horrible flavor. A little later, in England, the rules of succession had brought James II, a Catholic, to the throne. Soon, in 1688, the mostly Protestant English parliament got so fed up with James’ Catholicism that they decided that even a Dutch king would be preferable, so they threw a little coup and replaced him with William of Orange. William was so kind as to bring some jenever across the channel with him, where it spread profusely and became known as gin. London Dry Gin, the English style, is made from grain alcohol infused with juniper berries and other herbs, giving it a cleaner taste than the Dutch variety.

I recommend New Amsterdam Gin. It’s quite versatile and for only $18 per handle it’s a great buy.

Vermouth, from the German “Wermut” for wormwood, is a fortified grape wine infused with herbs, roots, and barks. Historically, not all sweet vermouths were red and not all dry vermouths were clear, but modern vermouth comes in two types:

First produced by Frenchman Joseph Noilly in the early 1800’s, this is the kind of vermouth for martinis.

Modern red vermouth was invented by Antonio Benedetto Carpano for the court of Turin in 1786. It’s probably worth mentioning that this doesn’t go into modern martinis. Sweet vermouth is notably used in the Manhattan.

Noilly Prat is the best brand of dry vermouth to buy, and the Martini brand is also good, especially for sweet vermouth. A little goes a long way, so I’d actually recommend going for the name brands in this case. Vermouth is probably not the best place to cut corners.

The martini allegedly spawned from a drink called the Martinez during San Francisco’s Barbary Coast days. The Martinez contained gin, sweet vermouth, bitters, and some other stuff. Developed around the turn of the century, the original martini contained a 1:1 ratio of gin to vermouth. Over time, dry vermouth replaced sweet vermouth and the bitters disappeared, leaving the the modern martini. Since the inception of the martini, there’s been a one-upsmanship battle over who can tolerate the driest martini, culminating in a collection of semi-funny bartender jokes, such as the Churchill martini: pour out a glass of gin, bow in the direction of France, garnish, and serve.

The cocktail glass, or martini glass, is almost certainly what you’ll think of when you picture a cocktail. The proper size for a cocktail glass is 4 oz., but the default in restaurants these days is more or less the size of a floor lamp. Instead of that, how about a wine glass?

There are a whole lot of ways to fiddle with the martini. Here are a few:

A martini is made with gin, although sometimes people refer to vodka martinis as “martinis.” If you really want to impress your friends with your unbearableness, use the original term for a vodka martini – the Kangaroo. Many people like vodka better (or dislike gin more?), including James Bond, who drank 18.75% more vodka martinis than gin.

The term “dry” in general refers to a lack of sugar. In the context of a martini, it means less vermouth. FDR preferred two parts gin to one part vermouth, whereas Ernest Hemingway took his martinis 15:1.

A “dirty” martini is one with olive juice in it.

James Bond is famous for ordering his martinis “shaken, not stirred.” Nowadays the default is that martinis be shaken in a cocktail shaker with ice cubes rather than stirred, crippling this classic line. Shaking mixes the drink more evenly, waters it down a little, and aerates it (old men call this “bruising the gin”), none of which are great. Shaking cocktails is a pain, so I just keep my gin in the freezer and stir.

A martini is garnished with cocktail olives, which are green and come in a jar. Usually, they’re stuffed with pimentos, but blue cheese-stuffed olives are great too. For those, make sure to rinse the oil off first.

If you substitute pickled onions for olives, you have a Gibson.