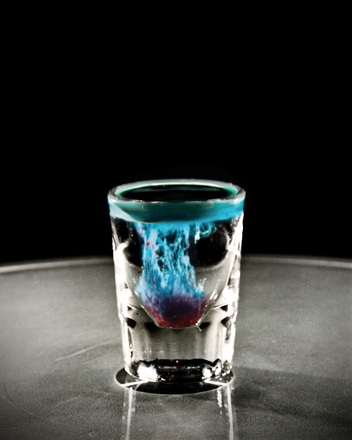 The Alien Brain Hemorrhage is an exercise in both spelling and layering. This drink relies on the differing densities of its ingredients in order to produce a stunning visual effect. As such, it’s essential that it be prepared in a clear shot glass.

A liqueur is an alcoholic beverage that has been flavored with fruit, herbs, nuts, spices, flowers, or cream and bottled with added sugar. Liqueurs are often sweet and flavorful, making them useful for mixing. Often liqueurs are between 15% and 30% ABV. Liqueurs should not be confused with liquors, which are stronger distilled beverages like vodka or tequila.

The word “Schnapps” originates from the Low German “Schnaps,” meaning “to swallow.” American Schnapps are made by infusing fruit flavors into grain alcohol, then diluting and sweetening. The result is a sweet, fruity liqueur that most people find easy to drink.

Bailey’s is the grandfather of Irish Creams, with a lineage dating all the way back to 1971, when it was conjured out of thin air by a group of distillery executives, not by made-up persons R&A Bailey as the Bailey’s website would have you believe. Bailey’s deserves recognition for both the quality of their product and the subtlety of their faux-authentic branding. Since its release in 1974, the brand has spawned a multitude of knockoffs, some of which are decent and some of which are not. As with all drinks, buying things that come in a glass bottle is usually a better bet than going with plastic.

Irish creams are made of whiskey mixed with cream, emulsified so they don’t separate out into their component parts. Sugar and spices such as chocolate, vanilla, and coffee are added to this mixture to give the drink a decidedly confectionary flavor.

Blue curacao adds a little orange flavor and a lot of blue color to a drink. It can sometimes be substituted for Cointreau or Triple Sec in a drink recipe.