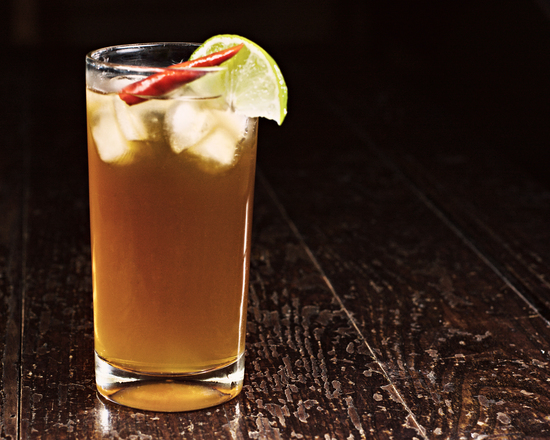 Drinks made from fermented sugarcane have been around for thousands of years, beginning with the cultivation of sugarcane in southern Asia and spreading with it from there. During the 17th century, some enterprising Caribbean plantation owners first distilled this sugarcane wine into a much stronger liquor, which an English traveler referred to as “That cursed liquor rhum, rumbullion, or kill-devil.” Rum weighed less and sold for more than weaker beverages, and it didn’t go bad on long voyages, making it ideal for shipping overseas. Rum was an important component in the Atlantic slave trade in the 17th, 18th, and 19th centuries, where it was shipped from Caribbean plantations to European ports.

When the Royal Navy captured Jamaica in 1655, they began giving their sailors a ration of Jamaican rum rather than French brandy. In 1740, to prevent sailors from stockpiling their rum rations and then drinking them all at once, Admiral Edward “Old Grog” Vernon decreed that the rum should be watered down with citrus juice, thereby creating the legendary “grog” and also accidentally preventing scurvy.

Before the proliferation of American whiskey, rum enjoyed a long streak of popularity in colonial America. George Washington was a rum enthusiast, known for garnering votes by means of liberal distribution of “bombo,” a mixture of rum, water, sugar and nutmeg. For his inauguration in 1789, he ordered that a barrel of rum be specially imported from Barbados.

Although there is no canonical categorization scheme for rums, rums can generally be broken into a few categories:

Presently, ginger beer is a ginger-flavored carbonated soda with citrus flavoring, usually produced in Australia or the Caribbean. If you can find them, you can save a lot of money by buying 2-liter bottles for $2 each instead of 12-oz cans or bottles for $1 each.

Besides the Dark ‘n’ Stormy, the only other drink I’ve ever made with ginger beer is the Moscow Mule. I don’t see why anyone would need a third.

Infusing vodka lets you experiment with different flavors on the cheap. Fruits, vegetables, herbs, spice, candy, bacon, you name it! At least for chili vodka, a cheap vodka works just fine. Put in as many chilis as you dare (I used dried ones), let your mixture sit for at least a week, and serve. As might be expected, the flavor will continue to intensify over time unless you remove the chilis. As a bonus, you’ll also have a ready supply of preserved chilis for cooking with.

A Dark ‘n’ Stormy requires two things: dark rum and ginger beer. I like Kraken and D&G, respectively. Usually you put in more ginger beer than dark rum, but the exact ratio is up to you. Many people like to add lime juice. We like to add chili vodka. If there’s something else you think might be good, give it a shot!